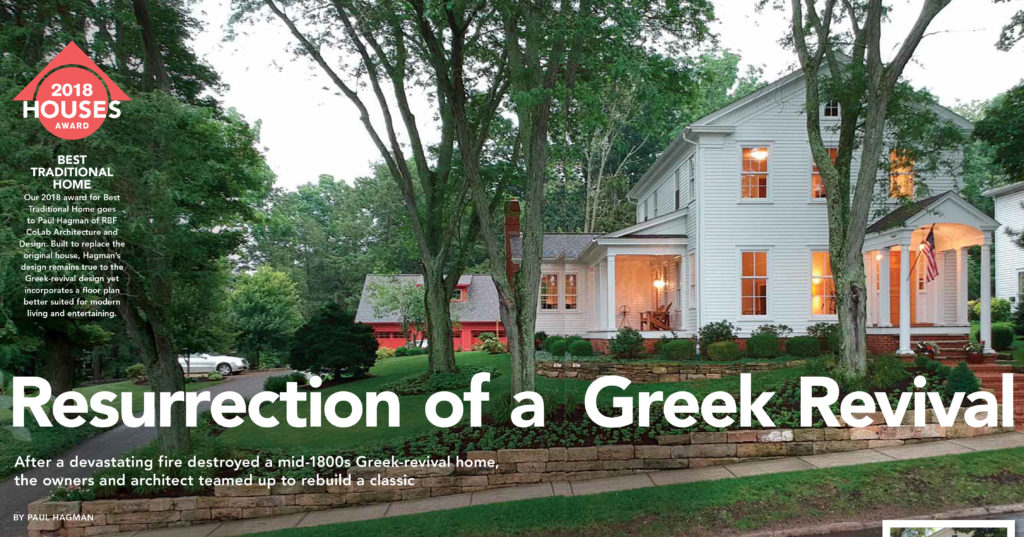 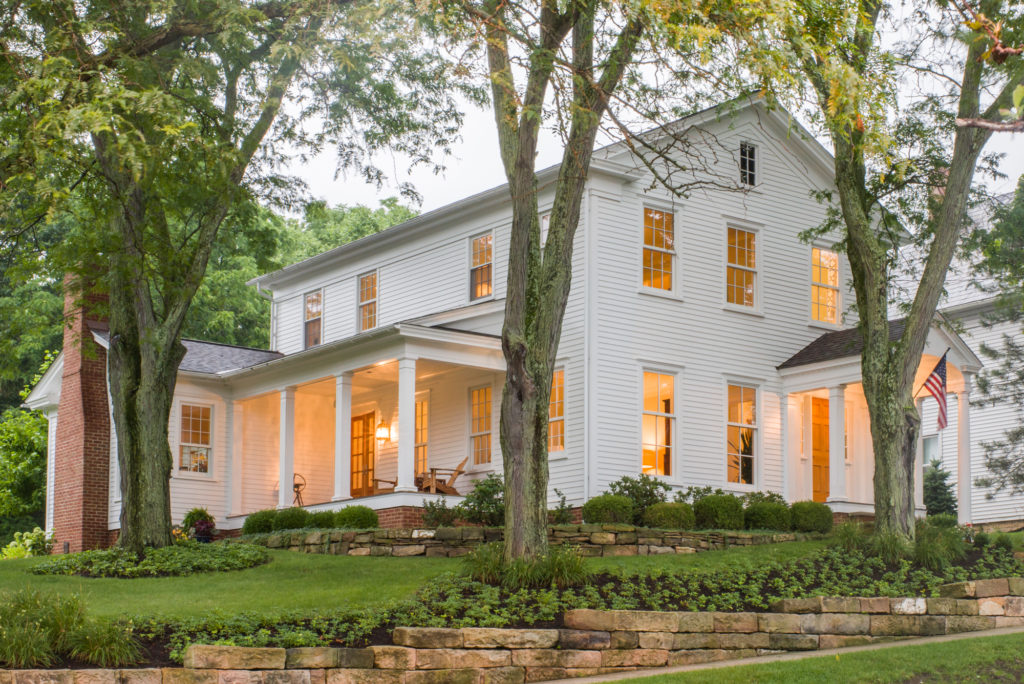 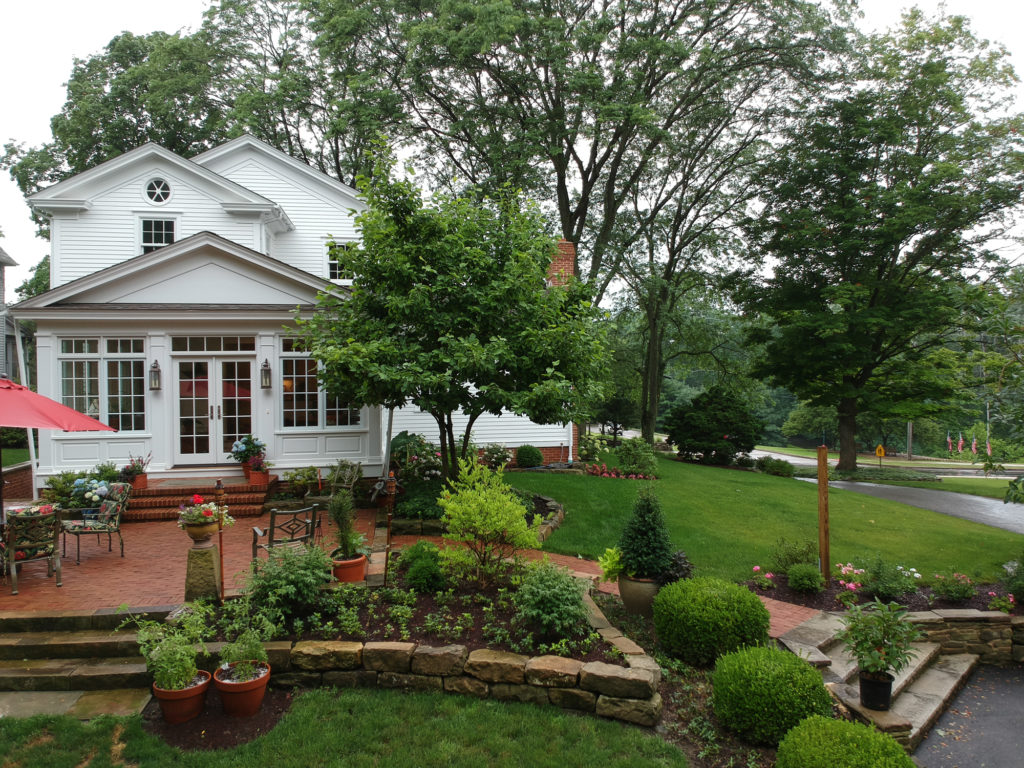 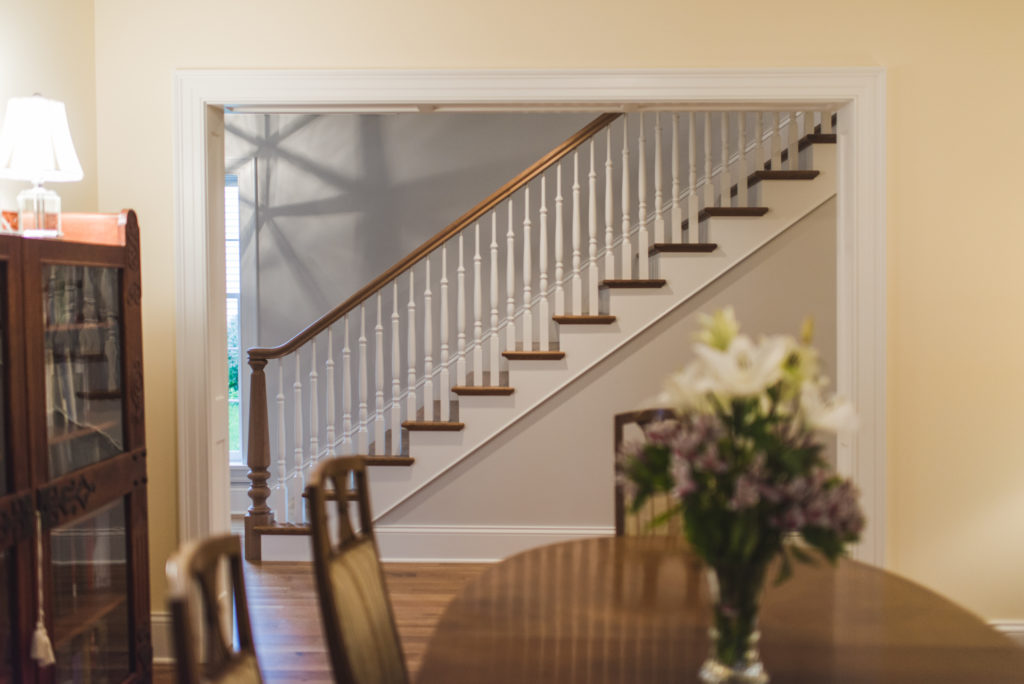 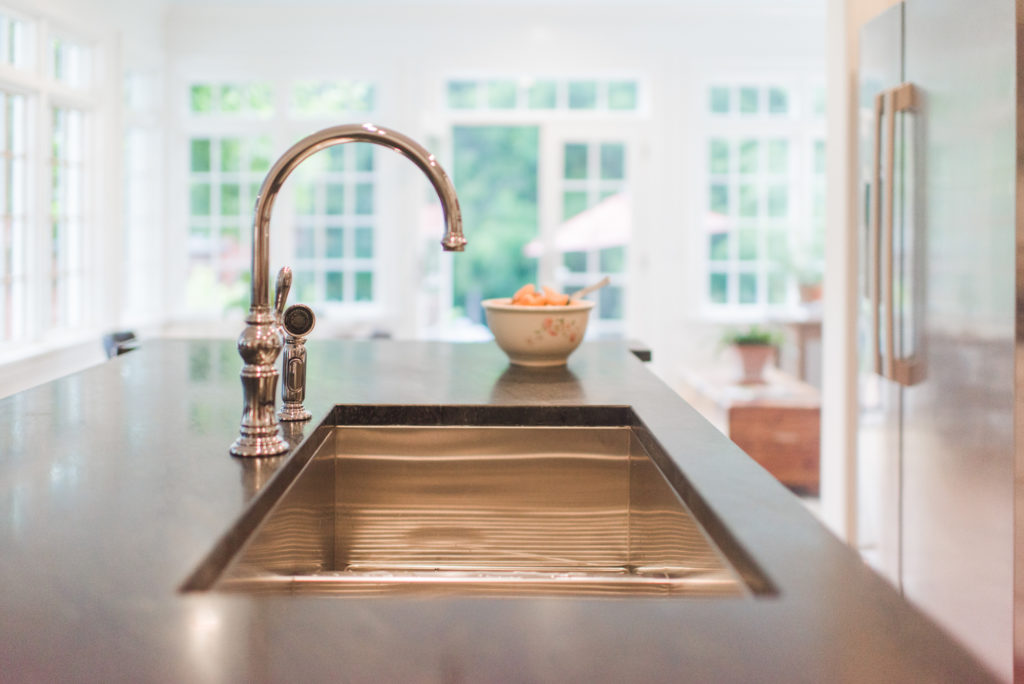 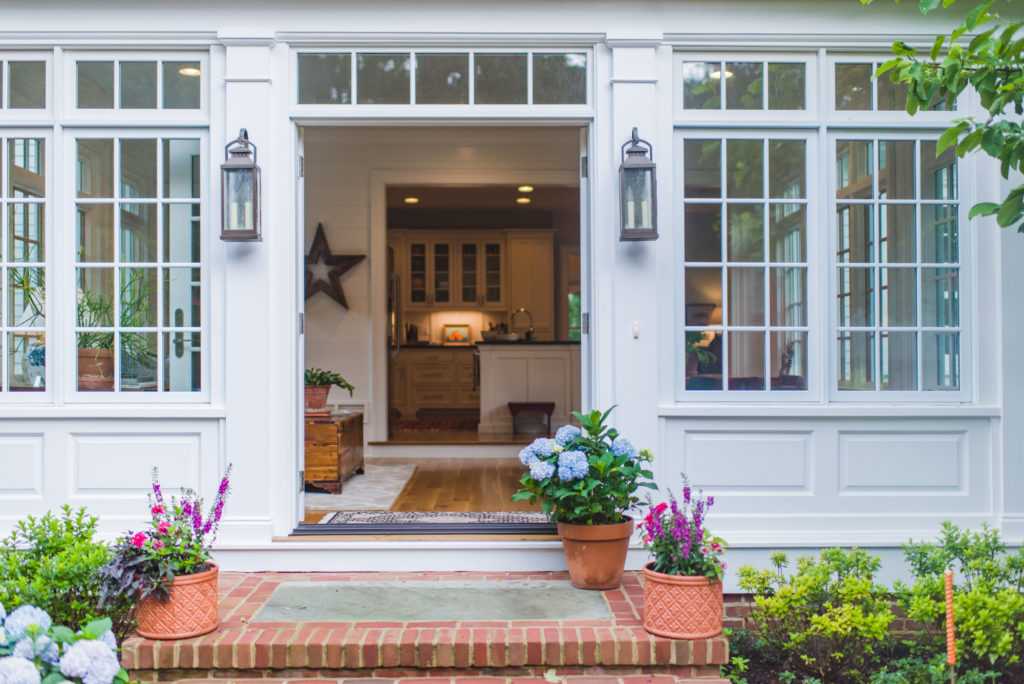 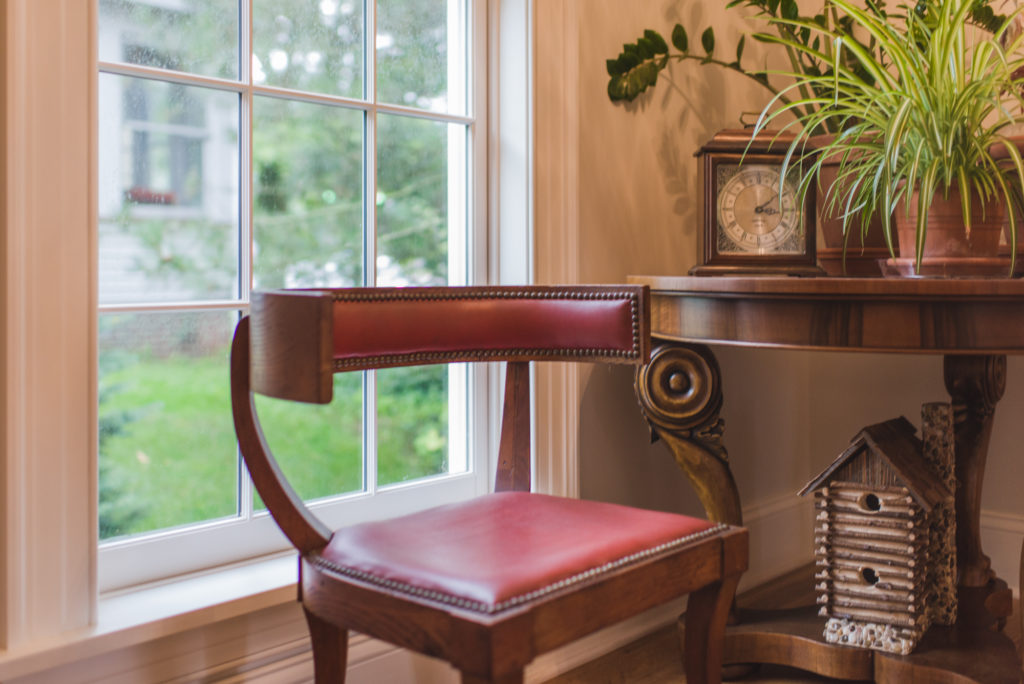 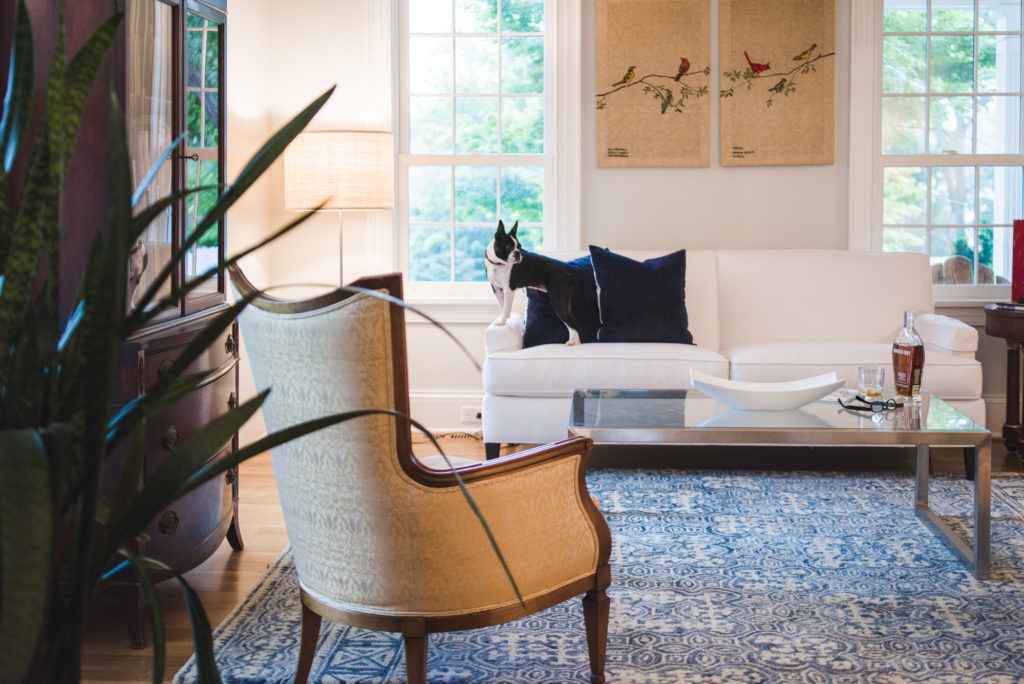 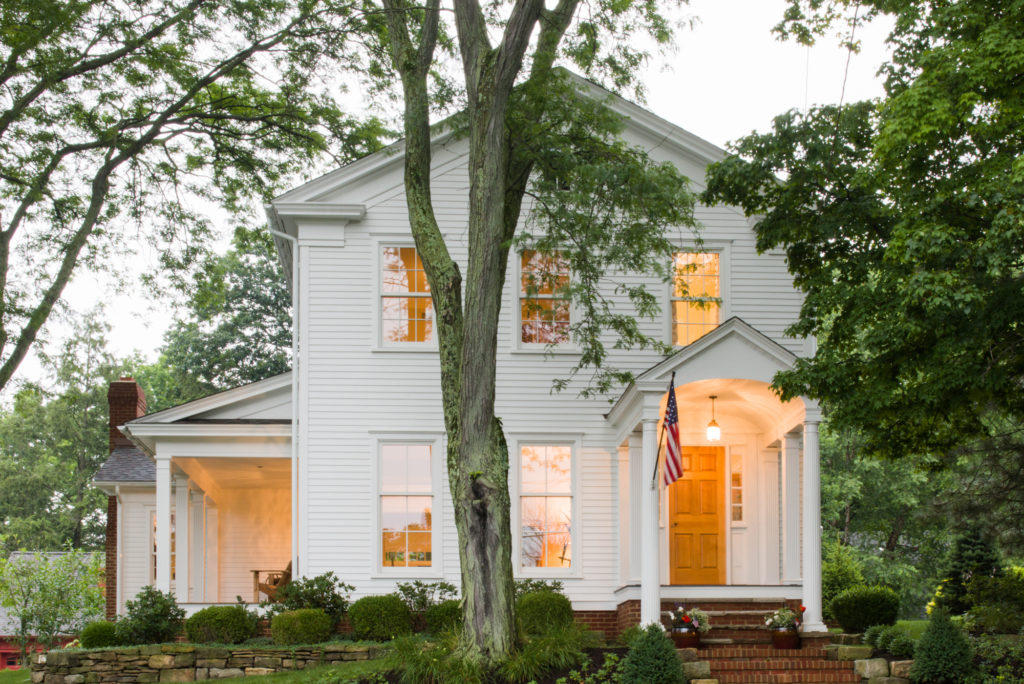 Held annually by Fine Homebuilding magazine and Taunton Press, the HOUSES Awards seek excellence in six building, design, and performance related categories. With a mixed magazine readership that includes both professionals and homeowners, each of the prestigious awards is granted to a single candidate that exemplifies the category.

Years of loving restoration work came to a terrible end when a devastating fire broke out. It had taken years to carefully strip, sand, mill, and replace each detail in the stunning mid-1800s example of Greek Revival architecture. In only minutes the fire destroyed it all. But the fire also ignited a resilience within the owners who decided that they would rebuild with the same degree of care and craftsmanship as they had put into restoring the original home.

The historic village of Poland, Ohio is a study in traditional architecture with well-maintained examples of almost every style of the 19th and 20th centuries.  The house is situated near the former childhood home of President William McKinley and surrounded by various Italianate, Second Empire, and Colonial houses.  Although the homeowners took their time before deciding to rebuild, the choice to design the new house in Greek Revival style was an obvious one.

The homeowners understood the importance of preserving the character of the historic district. “This community was so supportive during the renovation, and during the loss, and that motivated us to build a home that honored the spirit and character of our town.” One of the pair actually helped pen the village’s historic preservation guidelines, and the two wanted to remain faithful to the original home’s style, proportions, and siting, which took advantage of the gently rising lot and offered views of nearby Yellow Creek.

The project is not a replica, however.

When the owners approached me to help with the project, it was unclear whether the interior layout should imitate the layout of the former home or if a new approach should be taken to suit modern living.  Although rebuilding was unanticipated, the structural damage caused by the fire left no other option. The new build offered a unique opportunity to carefully reconsider the plan, and to introduce modern conveniences and building systems into a traditional style home.

After analyzing the previous home’s layout, it became evident that the largest challenge with the original plan was the centrally located stair.  This historic location, coupled with the modest size of the house, would have dictated the layout of all other rooms.  The possible floorplans would be severely limited.  The solution involved moving the new stair along the length of the structure. With this move, the remaining space was freed up for more creative planning to incorporate view corridors, gallery wall and unobstructed views across the creek to the historic village hall and park .

To add to the challenge, the previous home had received multiple renovations, additions, and reconfigurations over time. Each alteration added a layer of interest that the owners appreciated and weren’t eager to erase. The progressive changes that the home took on over time were, after all, a part of its history and told a story about the people who lived there.

A fully updated floor plan might accommodate modern living better, but risked feeling too sterile, uninterrupted, or inauthentic.   Together we decided that a successful approach to the new home would include the appearance of having received additions over time; giving the home a more comfortable, broken-in presence in keeping with its village context.

The process of creating the plans took many iterations, as spaces were arranged and rearranged on paper. We experimented with the appropriate blend of individual rooms and open sight lines, always keeping the former home in mind.  The fireplace was relocated several times to maintain views to the outdoors.  The floor plan that finally emerged has a less formal arrangement of rooms. It places the focus on the kitchen, living room, and 4-season room – where today’s modern entertaining takes place – but still retains a formal dining room, front sitting room, and shotgun entry hall.

The owners’ most highly used space has become the enclosed 4-season room, attached directly to the outdoor patio. This transitional space blends the interior and exterior and offers an ideal location for year-round entertaining.  In the warm months, guests are able to take in views of the wooded rear lot and appreciate the fine landscaping, while the northeast Ohio winters are best appreciated from inside this cozy space.

Because the owners wanted to maintain an historic feel, attention to construction methods and their impact on the atmosphere was important from the outset.  Not only was the exterior wall thickened for improved insulation, visual heft was given to many interior walls by using 2x6 and 2x8 construction, offering a truer representation of common mid-1800s construction.  This also provided an opportunity for additional detail to wrap around the cased openings.

In order to achieve accurate and pleasing proportions of the Greek Revival style, friezes and eave returns were carefully proportioned and dimensioned, referring often to details in Marianne Cusato’s book, Get Your House Right.

Warmth is brought into the home through the rubble stone and brick fireplace and carried throughout on the honey-colored, quarter sawn white oak flooring.  The large cottage-sash windows allow in ample natural light, highlighting the hardwood floors.

The result is a warm home which acknowledges its traditional context, accommodates today’s modern needs, and engages guests with delightful details.

We should expect the planning and execution of a home as well-crafted as this to take a bit longer than most homes.  My experience shows that the best results come from a detailed set of plans and clear expectations developed in collaboration with the owners.  This means taking the time to fully develop ideas and assess their suitability.

This project also benefited from the owners’ hands-on approach to construction.  Having grown up in a construction family, oversight of the construction process was undertaken by one of the homeowners who was able to make decisions and refinements along the way. When unforeseen circumstances arose requiring changes, he was prepared.

Engaging with true craftsmen throughout the process yielded some exquisite details.  Performance Home Works of North Jackson LLC meticulously executed the finish carpentry from the three-piece stacked moldings to the authentic two-piece window casings, manufactured by Baird Brothers Fine Hardwoods. The unique marble and subway tile combinations in the master and guest baths were designed by the homeowner and installed by Ayers Flooring, complementing the custom bath and kitchen cabinetry by Pine Hollow Woodcraft. The exterior hemlock clapboard siding from Granville Manufacturing Company of Granville, VT, frieze boards and cornice work were expertly installed by CDT Construction Inc.

The loss of the historic home was a tragedy, but elements of it persist. The original home’s finely detailed portico and columns were salvaged to create a formal entryway for strangers and unexpected guests. The weighty front door was handcrafted by the owner using lumber salvaged from the original home.  Most often, however, friends and family are drawn from the carriage house and garage, across the brick and stone patio – composed of original foundation stones – to join their hosts in the 4-season room. Foundation stones and horse hitching stones make an appearance as handsome accents on the rear patio.

Although the original home is no longer standing, with great dedication and skilled craftsmanship of their own, the owners honored each of the craftsmen who had a hand in shaping the former home while adding their own chapter to the story of this homestead.